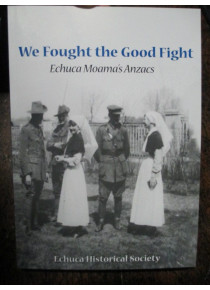 We Fought The Good Fight : Echuca Moama’s Anzacs by J.Hollingsworth and J. Ferris

If one has ever been to the Port of Echuca at night it is hard to miss the well lite and  most elaborate World War One Memorial located in front of the local Shire chambers.
It’s a large memorial, which represents the enormous military heritage of this old Town. The book was published to honour the men and women who enlisted from the district of Echuca and Moama during World War 1 and served at Gallipoli.
The primary source for research were the wartime letters many of which were written by the Anzac veterans while in trenches at Gallipoli.
People of the community were desperate for any news or related information about love ones at the front. Most of these letters became a source of news and were published in the district newspaper the Riverine Herald. The authors, both members of the Echuca Historical Society, have woven an historical biographical memorial to the Boys of Anzac from their District.

These local military histories are sought after by genealogy, medal researchers and Australian military historians. Importantly, the book concludes with a Roll of Honour of men and women who served from the Echuca and district during the Great War.