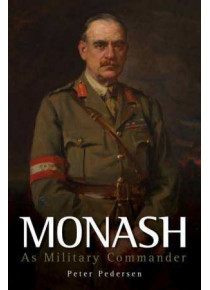 A highly regarded War biography of Sir General Monash. First printed in 1985 this is a revised edition of the original book﻿. This book is nicely presented as a dust jacketed ﻿hardcover with the superb Longstaff painting of  Monash.﻿

Monash was a Commander in the AIF right from its creation. On Gallipoli he commandered the 4th Brigade AIF. On the Western Front he started with the command of the newly formed 3rd Division AIF in July 1916. Taking part in the 3rd Ypres Battles.
However the year 1918 was a great period of success for Monash and the five divisions of the newly formed ‘Australian Corps’. From May 1918, they come under the overall command for the first time of an Australian, Lieutenant General John Monash. Monash was knighted in the field at his headquarters at the Chateau de Bertangles after the British Allied success at the Battle of Amiens in August 1918. The major victories are listed as Defence of Amiens Dernancourt Villers-Bretonneux Battle of Hamel Battle of Mont St Quentin Battle of Hindenburg Line Mountbrehain.

﻿He led his Australians through a series of victorious actions until the end of the war. He is the greatest soldier Australia has ever bred and at the time was regarded as a military tactical genius. At no time before or after WW1 has Australia ever held such prominence or power on the world stage as it did by the end of WW1

We thank Monash and the AIF for this achievement -
may their memory not be forgotten.
Lest We Forget