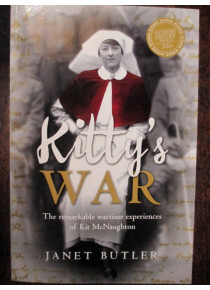 Kit McNaughton AANS is the nurse portrayed in the popular 2014 ABC mini Series THE WAR THAT CHANGED US﻿. The author Janet Butler also appears on the documentary as a consulting historian.

This book records the memorable wartime experiences of Kit McNaughton AANS.  Kitty’s War is based upon the previously unpublished war diaries of WW1 army nurse Sister Kit McNaughton - an Anzac Girl by all accounts. Kit and author historian Janet Butler grew up in the same Western Victoria district of Little River - drystone walls, wheatfields and meandering creeks, except many decades apart.

Kitty embarked on the troopship Orsova, in July 1915 bound for Egypt. Kit’s absorbing diaries follow her journey through war, from Egypt, where she cared for the Gallipoli sick and wounded,to the harsh conditions of Lemnos Island, off the coast of the Dardanelles - Sept 1915 to Jan 1916. No 1 Australian Stationary Hospital, and then on to France and the Somme.

Here she nursed severely wounded German soldiers for the British.

During Passchendaele, a year later, she ran the operating theatre of a clearing station near the front line. Kit finished the war as Australia’s first plastic surgery nurse, assisting medical pioneers in this field as they repaired the shattered faces of Australian soldiers. Through Kitty’s diaries and Janet Butler’s thoughtful narration, we see the war through the eyes of a young Australian nurse as she is transformed by what she witnesses. Kitty’s War is an intimate and rare story of one woman’s remarkable experience of war.﻿
Further companion reading please see  Queenie