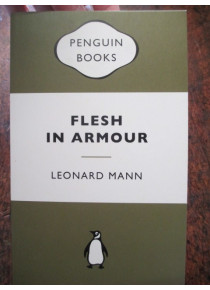 The author Leonard Mann was born in Melbourne in 1895. He enlisted in the AIF on the 12 January 1917﻿. Promoted to corporal in the next month, he sailed for Britain aboard the troopship Ballarat. After training at Southampton he proceeded in September to France, where he saw action on the Western Front with the 39th Battalion. In February 1918 he joined the headquarters of the 5th Division Engineers. He served as a sapper and was promoted to sergeant in March. Having transferred to the 8th Field Company in October, he returned to Britain in January 1919 before embarking for Australia. His experiences in the trenches, including being buried alive by a shell burst and losing consciousness in the mud before his rescue, were to affect him for the rest of his life. He was discharged from the AIF on 9 June.

Back in Melbourne, Mann completed his degree and signed the Victorian Bar Roll on 28 April 1921.﻿ He wrote and published this novel based on his Western Front WW1 experiences 1932.
The 1st edition is quite rare.