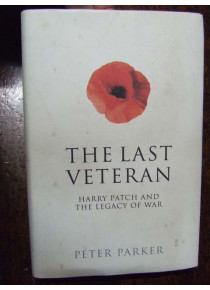 The Last Veteran Harry Patch and the Legacy of War by P. Parker.

The Last Veteran Harry Patch and the Legacy of War by P. Parker.﻿ New book

The Last Veteran Harry Patch and the Legacy of War by P. Parker.
Details not only Patch's life but investigates what stuff the heroes of 1914-18 were made of, to an extent it also illustrates the disillusion that set in soon after the war was over. He became remarkable by living for so long.﻿

Harry Patch served as a private in the Duke of Cornwall's Light Infantry at the Battle of Passchendaele in 1917. He was married in 1919 and had two sons. Between the wars he worked as a plumber and on building sites in the Bristol area, and when the Second World War broke out he served first as a firefighter throughout the Bath Blitz and later alongside American troops in the run-up to D-Day. In 2002 he attended the seventy-fifth anniversary of the inauguration of the Menin Gate at Ypres, and in 2005 he took part in the BBC TV documentary The Last Tommy and was awarded an honorary degree by the University of Bristol.
He died in July 2009.﻿