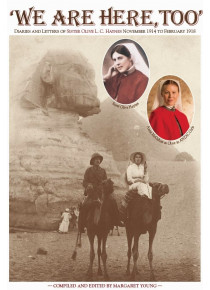 We Are Here Too The Diaries and Letters of Sister Olive L.C. Haynes November 1914 to February 1918 edited by M. Young

This book records the diary, letters and many photos of Sister Olive Haynes who was one of 5 nurses portrayed in the recently released ABC miniseries ﻿Anzac Girls.﻿

Olive's daughter, Margaret received her Mother's diaries and letters from her Father, Pat Dooley following Olive’s death.﻿ In 1991, she published the 1st edition of this book. The title, 'We Are Here Too' refers to Olive’s frustration that attention was always on ‘our boys’, but ‘our girls’ were almost completely ignored.﻿

Due to the extraordinary details shown within this book, Olive was a leading character portrayed in the mini series. Olive's true life experiences as a nurse on Lemnos Island was an inspirational segment of the Anzac Girls drama documentary. Not to forget, Pat Dooley and Olive's blossoming love on the Western Front. In the Anzac Girls series, Olive is played by Anna McGahan, and the
DVD ﻿of the series is available, Click here to see details

The sacrifice of the Australian World War One nurses (AANS) is only now being recognised. We can be thankful that many of these nurses, the so called ‘Anzac Girls’ left behind such detailed diaries, letters and documentation so that our generation can remember their service to Australia﻿