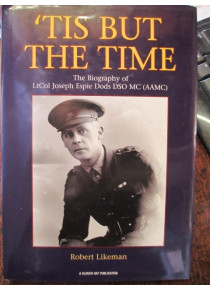 'Tis But The Time Biography of a Dr Joseph Espie Dods DSO and MC (AAMC)﻿ By R. Likeman

The biography of a famous Queensland Doctor, Dr Joseph Espie Dods who served in the Boer War with the Queensland Mounted Infantry, in Egypt & Gallipoli with the 5th Australian Light Horse Regiment and Medical staff 1st Division﻿ on the Western Front﻿ France. Although there are two chapters written on the family history of Joseph Espie Dods ﻿his forebears being the Marks family, Stodart Family and Dods﻿ most of the book is about his war service.

In 1899, Dods become medical officer with the Queensland Mounted Infantry and he sailed with this unit to the Boer war. He took part in action at Sunnyside Bloemfontein, Vet River, Zand River, Pretoria and the Kimberley.
Upon his return to Queensland he was appointed the Government Medical Officer.
On 13 October 1914 at age 40, he enlisted with the AIF 5th Light Horse Regiment.﻿ On 20 May 1915 he landed at Anzac Cove Gallipoli﻿ with the 5th Light Horse. ﻿During the Offensive,﻿ on 29 August 1915 he left the trenches and﻿ went out into no man's land to attend a wounded man when he was himself severely wounded in his shoulder ﻿by shrapnel.﻿

On 1 January 1916 he was awarded the Military Cross for gallantry shown on Gallipoli. ﻿ He was then transferred to the 1st Australian Division Headquarters and went with that unit to the Western Front.﻿

Dods was  awarded the DSO the Distinguished Service Order for his efforts at the Battle of Pozieres. On 20 March 1917 he left England and returned to Australia.
On Saturday, 6 December 1930, Dr Dods attended the family lunch at their home on Wickham Terrace Brisbane.The family were then travelling to a holiday house at Mt. Tamborine he had gone down to the garage to fetch the car.
When he did not return, housekeepers were sent to see where he was, tragically they found that he had committed siucide.
It was thought he had been suffering war related stress.﻿

The book also includes several bios of family members who had joined the armed forces, Bill who was the eldest son of Dr Dods became a pilot in World War II and was killed when his Sunderland plane crashed on a rescue mission in the Europe.﻿﻿