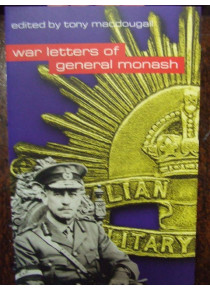 War Letters of General Monash ' edited T Macdougall .
General Monash wrote extremely detailed letters to his wife giving high detail of the day's
events. These letters are compiled in this book. In June 1918 he was promoted
to Lieutenant-General and appointed to command the Australian Corps in France.
( His Gallipoli letters are also shown in this book.) He led his Australians
through a series of victorious actions until the end of the war.
He is the greatest soldier Australia has ever bred and at the time was regarded
as a military tactical genius. At no time before or after WW1 has Australia
ever held such prominence or power on the world stage as it did by the end of
WW1. We thank Monash and the AIF for this achievement -may their memory not
be forgotten.