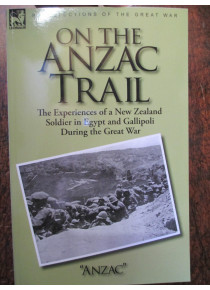 On the Anzac Trail by "Anzac"

This book is a reprint of the original published in 1916.﻿ Has much unique information from the chronologically dated diary of the soldier. The Soldier remained anonymous and has never been identified apart from being a New Zealand Sapper who was wounded on Anzac Gallipoli.﻿

The anonymous author of this Great War memoir was already an experienced soldier at the outbreak of the Great War. He had been a long term 'Old Colonial' in New Zealand and had fought with the 'Maori-landers' throughout the Boer War. Now living in Ireland he answered the call for colonial men to rally to colours and joined his countrymen in London. A draft took them to Egypt where they expected to join the N. Z. Mounted Rifles regiments, but much against his will he found himself instead recruited into the ranks of the Engineers as a sapper.

The Gallipoli Campaign put an end to many soldiers’ preconceptions as to the manner in which their war would be fought. The author and his comrades soon found themselves fighting the Turks as infantry in the closely contested battles of the trenches of the Gallipoli peninsular. His descriptions of combat make immediate and gripping reading and predictably the spirit of 'Anzac' is written large in these pages. The book is based on the author’s journal written as momentous events unfolded and concludes as he recovers from wounds having been declared unfit for further service.