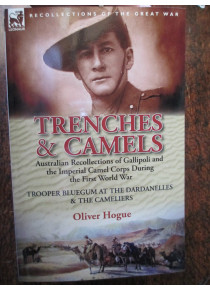 This is a combination of two books (scarce in the original editions) written by Oliver Hogue during WW1.
1. Trooper Bluegum at the Dardenelles﻿
2. The Cameliers

1. Trooper Bluegum at the Dardenelles Descriptive Narratives of the More Desperate Australian Engagements on the Gallipoli Peninsula by Oliver Hogue of the 6th Light Horse Regiment.

The Author, Oliver Hogue (1880-1919), was a journalist with the Sydney Herald before enlisting in the AIF.﻿

Oliver Hogue enlisted with the 6th Australian Light Horse on 16/9/14 and rose to the rank of Major before he died of disease on the 3rd March 1919.

During the Dardenelles campaign his reports were published in the Sydney Morning Herald under the pseudonym of 'Trooper Bluegum'.

The articles that he wrote for the Herald and further letters written back home form the basis of this book, Trooper Bluegum at the Dardanelles (London, first published 1916) and another book titled ﻿Love Letters of an Anzac (not in this collection). ﻿

Thus this book is written by a professional journalist in fine descriptive style. For near a century, this book has been recognised as an outstanding first-hand record of the 6th Australian Light Horse on Gallipoli, there is great detail in his narrative which covers his enlistment and basic training in Australia, journey to Egypt and his time on the Gallipoli peninsula.

In November 1916, he transferred to the Imperial Camel Corps where he was promoted Captain on 3 July 1917. He fought with the Camel Corps at Magdhaba, Rafa, Gaza, Tel el Khuweilfe, Musallabeh, and the first trans-Jordan raid to Amman.

In 1917, Hogue led the 'Pilgrim's Patrol' of 50 Cameliers and two machine-guns into the Sinai desert to Jebel Mousa, to collect Turkish rifles from the Bedouins.﻿

2. We come to the second Title in this combination book which was also written by Hogue. During the period 1917-19, Hogue wrote a third book, The Cameliers (London, 1919). The Cameliers is a record of his time spent with the Camel Corps. He died of Spanish influenza at the 3rd London General Hospital on the 3 March 1919.﻿

We also stock a single edition of the Cameliers book﻿