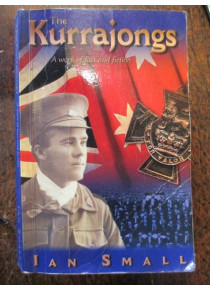 The Kurrajongs " by I. Small﻿

In January 1916 a group of 114 men left Inverell in New England Region NSW to fight in the Great War . Kurrajongs was the name given to the group who were taking part in a recruiting march. Their route (travelling by train) started in Inverell, and marched through the following NSW country towns Warialda, Moree, Narrabri. There were actually two contingents, the first of 114 men leaving Inverell on 12 January 1916. A second, smaller group departed on 29 February. On arrival at Narrabri, the Kurrajongs were transported to the Armidale training camp, then to the Rutherford camp. Most were allotted to the new 33rd Infantry Battalion, known as New England’s Own.
Through the use of fictional characters the author follows these men from the march through their experiences on the Western Front - The work is a mixture of fact and fiction. Although most of the story is true and historically accurate.