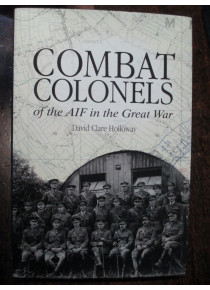 Combat Colonels of the AIF in the Great War

Combat Colonels of the AIF in the Great War by D.C.Holloway

Every AIF soldier of the Great War regarded his battalion as his home. This was where he felt he belonged. At the head of that unit was the Commanding Officer or CO — the lieutenant colonel who commanded the men, trained them, led them into action and rebuilt the unit following its time in the front line. There are myriad accounts and histories of divisions.

Brigades and battalions, of battles and actions great and small, some of which name the CO of a battalion, while others do not. The Official Histories, the various unit war diaries and many of the unit histories are likewise inconsistent, often neglecting to identify the unit’s CO other than as ‘the CO’ or ‘the old man’.

The author, the son of an AIF veteran of the 41st Battalion who served from Passchendaele to the Hindenburg Line, asked his father the name of the man who had commanded his battalion. He replied curtly, ‘Goodness knows, we were much too busy to worry about that!’

The author discovered that the 41st had not one CO, but three. And so it was reflected with most AIF combat units. Age, exhaustion, wounds, death and promotion all contributed to the rotation of battalion and formation COs. By the end of the war, CO appointees for the 60 infantry battalions, 15 light horse regiments, 25 artillery brigades,,5 machine-gun, 5 pioneer, 2 cyclist, 4 camel corps battalions and 5 ammunition columns reached almost 500; the number of individual appointments numbering close to 2000.

Combat Colonels of the AIF in the Great War seeks to address the regrettable gap in Australia’s documented history of its combat colonels. Its purpose is to name all the Commanding Officers who led units into action in the Great War and to describe their lives before and, for those who survived, after the war. From these pages emerge the men who shaped Australia’s battlefield history - both the professional soldiers and the former teachers, accountants, salesmen, clerks, farmers and others from a broad range of occupations whose leadership on and off the battlefield proved so crucial. These are men Australia cannot afford to forget.