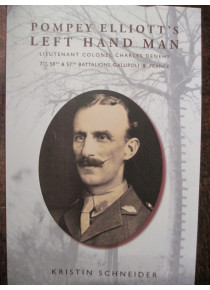 Biography Of Lt Colonel Charles Denehy and his time with
the 7th, 58th and 57th Battalions as they fought at Gallipoli Anzac and the Western Front.﻿

Numerous amount of new information about the Commanding Officer of the 58th and 57th Battalion in WW1. History of his WW1 service and men that fought with him.

Denehy started his military career as a member of the Western Victoria Militia under the command of Pompey Elliott. Pompey declared him as his 'left hand man' for his leadership qualities.
Denehy was twice wounded in action, he received a severe gunshot wound on the 25th April 1915 after landing with the 7th Battalion.
He was mentioned in despatches 3 times and was awarded the DSO twice.
The book would be of valuable assistance to all family historians (especially of the Battalions served), medal researchers and to those seeking information about the life and times of an Australian WW1 Battalion Commander.  ﻿