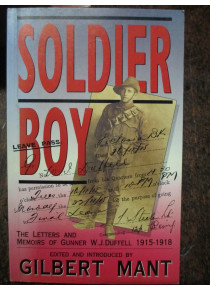 In March 1990, an old shoe box was uncovered in a Port Macquarie garage. In this box, 153 letters were found which dated from WW1.

The letters had been written by No 9898 Gunner William John Duffell. Duffell was a member of 1st Australian Field Artillery Brigade (1 FAB) serving on 2nd and 22 nd Batteries.

Gunner Duffell enlisted in late September 1915 a few weeks before his 18th Birthday. He served in Egypt, France and Belgium. He was returned to Australia in October 1918, unfit for duty, a few days before his 21 st Birthday.
A compulsive letter-writer and diarist, Duffell promised his mother to write home and he did - at least once a week every week.
This book would be of immense interest to researchers wanting to follow the life and times of a FAB unit a nd more particularly 1st Australian Field Artillery Brigade ﻿. Letters exhibit high detail about every day life.