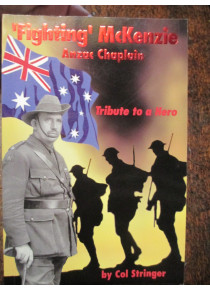 In 1914, after 25 years service in The Salvation Army he was appointed as a AIF Military Chaplain. The following year he accompanied the Anzac Forces on the Gallipoli campaign.
It was here he earned the nickname 'Fighting Mac'.

Shunning concerns for his own safety, he often conducted services and funerals under enemy fire. When orders came to storm the Turkish trenches Mac was urged to return to safety. Despite this he was with the troops on their assault. At the Charge of Lone Pine, armed with only a shovel.
His 'boys' pleaded with him to stay behind, but he replied:"Boys, I have lived with you, I've preached to you and I've prayed with you . Do you think I'm afraid to die with you?"

Following service in Gallipoli he was appointed Chaplain to the 4th Battalion of The First Australian Infantry Brigade in Egypt.

In 1917 Mac went with the Battalion to France. He was with the Fighting Fourth at Pozieres , Bullecourt , Mouquet Farm , Passchendaele Ridge and on the Somme. Those in charge often feared for his safety but yet again Mac shunned their pleadings and would often accompany the men into battle.

After three and a half years service with the troops a decree limiting overseas service of Chaplains recalled William McKenzie to Australia. He was accorded a grand farewell by the troops, complete with parade and military band music. At the Commanding Officer's invitation, Mac passed up and down the ranks shaking hands with every man.

Attending Buckingham Palace at Royal Command, he received the Military Cross from King George V in recognition of his military service. General Bramwell Booth bestowed upon him the Order Of The Founder, marking memorable service that would have commended itself to the Army's Founder, William Booth. Australia gave Fighting Mac a tremendous welcome home. Great public gatherings were held in each state and a crowd of around 7000 greeted him at the Melbourne Exhibition. At the request of the N.S.W. Government, he spent 12 months on special service assisting with the repatriation of returned soldiers, traveling far and wide in the interests of his old comrades.

An offer of a permanent position, which he refused, carried a salary of £2000.00 a year. In 1927 he was appointed to command The Salvation Army's work in China, where many of the Army's Australian Officers were serving as missionaries. Recalled to Australia in 1930, he was appointed Territorial Commander of The Australian Southern Territory. At the Generals wish he returned to China to carry out a series of spiritual campaigns in the land where he had once served. Similar work in Australia followed before Fighting Mac, his days of active service over, entered into retirement. As a fitting tribute to his many years of service given to others, he was awarded The Order Of The British Empire. The leading interviewer of one of Australia's newspapers paid him the following tribute.

"There is no more picturesque personality or better loved man in Australia than Commissioner William McKenzie, M.C., of The Salvation Army - "Fighting Mac" to countless returned Diggers and to the Commonwealth at large"

A VERY BRAVE AUSTRALIAN - LEST WE FORGET
95% of the book is his Military career WW1.
Detailed text well supported by many illustrations.