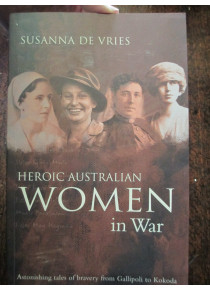 Sister Alice Kitchen was with the first contingent in WW1, a true ANZAC Girl nurse who travelled on the 'Benalla' troopship sailing on the 19th October 1914.

These are all women who deserve to be known, recognised and celebrated alongside their male peers. In her informal, vivid style, de Vries focuses not only on the astounding courage these women displayed in battle, but also on their personal struggles and accomplishments