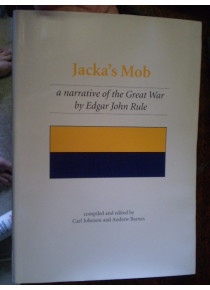 'Jacka's Mob ' by Edgar Rule
compiled for this 1999 edition by C Johnson & A Barnes.

'Jacka's Mob ' by Edgar Rule
compiled for this 1999 edition by C Johnson & A Barnes.

In 1915, Edgar (Ted) Rule was a orchardist whose farm was located near Shepparton Victoria. He was inspired by the Gallipoli landings  to join the AIF. He enlisted with the reinforcements for the 14th Battalion on the June 28th, 1915.

He kept a diary from the time he landed on Gallipoli with his reinforcements of the 14th Battalion. He continued his diary throughout
the war having served in many battles including Pozieres Bullecourt Messines 1917 Amiens Albert 1918. During the war, he was awarded two gallantry medals the Military Medal in 1916 and the Military Cross in 1917.

After the war Rule returned to his farm. Sometime later, Edgar Rule's diary became known to Charles Bean. Bean had the diary typed and urged Rule to have the diary published. Rule worked towards having the diary published as a based on narrative book making use of aliases to protect the identity and reputations of men many of whom were still alive in 1932.

After the death of Albert Jacka in 1932 in admiration he changed the name of his proposed book from 'These Australians' to Jacka's Mob.

Jacka's Mob was 1st published in 1933 and a 2nd edition was quickly reprinted in that same year. Jacka's Mob was never printed again as a single volume. Thus with the emergence of the greater interest in genealogy and military research the original 1933 books have been highly sought after.

Although the original book details were true to his diary it still has the problem that it used aliases. The advantage of this recompiled book is that the aliases have been replaced with the real names of the soldiers (where possible).

So this new reprint is immensely more valuable to the researcher than the original. Edgar Rule died on the 22nd July 1958.

The Fourteenth Battalion was raised in Victoria in mid-September 1914.
During the four years of war upwards of 5000 men passed through its ranks. It was awarded an extensive list of Battle Honours during this time for brave and selfless service of King and Country in all theatres of war.

The Battalion Association, formed after the War, was one of the strongest. The Australian Hero, Albert Jacka, was an original member and was Australia's first recipitent of the Victoria Cross in WW1.

He was dubbed by C.E.W. Bean as the 'nation's greatest fighting soldier'.
When he died in 1932 there was an enormous public outpouring of grief and the Battalion Association organised an annual pilgrimage to the site of his grave in St Kilda.