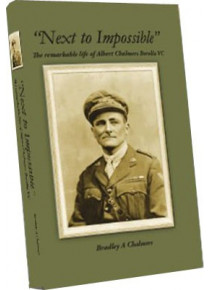 Next to Impossible - The Remarkable  Life of Albert Chalmers-Borella VC by B. Chalmers

A dedicated History of the 26th Battalion has never been written.
This book has a vast amount of historical details about the Battalion which has been intertwined with the story of the Battalion member Albert Borella VC. The Author documents much of the WW1 26 Battalion diary and Battalion historical data from other sources within the narrative. Thus this book would be of immense interest to anyone wanting to research soldiers who were part of this Battalion. ﻿

Borella was a Victorian farmer who had been working in the Northern Territory at the outbreak of WW1.﻿

On the 15 March 1915, Albert ﻿Borella enlisted for WW1 service as a Private with the 26th Battalion. He landed with the 26 Battalion at Gallipoli in September 1915 and remained at Anzac until November 1915 when he become ill with jaundice.

He rejoined the unit in time for its transfer to the Western Front. In July 1916 he was wounded at the Battle of Pozieres. On the night of the 1/2 March 1917, he took part in furious fighting at Walencourt for which he was awarded the Military Medal for gallantry. Along with three other NCO’s of the 26th Battalion he was also Mentioned in Despatches for Devotion to Duty.

He had been achieving successive promotions and received his commission to Second Lieutenant on the 7 April 1917.﻿﻿
During July 1918, he was recommended for a Distinguished Service Order medal but this request was not concurred. However, for action during the same month while fighting at Villers-Bretonneux, France he was awarded the highest military honour the Victoria Cross.
While leading his platoon in an assault on an enemy support trench, he noticed a machine gun firing through the Australian barrage and ran out ahead of his men into the barrage, shot the gunners with his revolver and captured the gun. He then led a small party against the strongly held Jaffa trench, 200 metres beyond his actual objective. A sharp fight ensued and the surprised defenders were showered with bombs and Lewis gun fire with the result that thirty Germans emerged from two dug-outs and were taken prisoner.

He was the oldest member of the first AIF to be decorated with a VC.

He remained with the 26 Battalion the entire war so this book has a vast amount of historical information directly about the Battalion and the soldiers who dedicated their lives for the Honour of this Australian military unit.

Albert Borella survived WW1, later serving in Garrison Units during WW2.
He settled in Albury NSW and died in 1968.
A brass statue memorial commemorates his life.