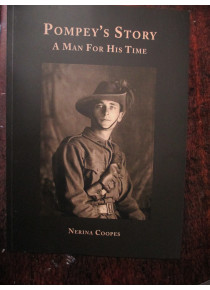 Pompey's Story A Man For His Time by N. Coopes

Story of the World War I Light Horseman, Arthur W Gull. Before enlisting in WW1, Gull was a Master Pearler in Broome WA. He enlisted with the 10th Light Horse Regiment in January 1915 and his war record included surviving the Charge at the Nek on Gallipoli.

He saw some service with the 10th Light Horse Regiment in the Sinai before transferring to the 14th Company Imperial Camel Corps (ICC) in July 1916. He was a commissioned officer, Lieutenant, in the ICC and he went on to become a staff officer in its 1st Battalion. He took part in special missions to Aqaba and Lawrence of Arabia. He participated in most of the battles fought by the Imperial Camel Corps and was then transferred to﻿ the 14th Light Horse. He took part﻿ in the Great Ride to Damascus, where as one of the advance guards, he was awarded the Military Cross medal. He remained with the 14th Light Horse in Syria and undertook mopping up operations until July 1919. After war service﻿, he returned to Broome which saw him reenlist at the start of World War II. He served as an officer with the Rottnest Island 10th Garrison Battalion. He died in 1964.﻿