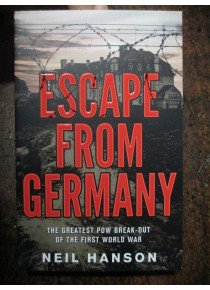 Escape from Germany The Greatest POW Break-Out of the First World War by N. Hanson

Several Australians took part in the Holzminden breakout during the later part World War One. Importantly, the book offers interesting and definitive accounts of what life was like as a POW of the Germans during WW1. This book would be a great read for anyone who had a relative interned as a POW during World War I.﻿

In 1918, Holzminden was the most heavily guarded POW camp in the world. Patrolled by ferocious dogs and armed guards with orders to shoot to kill, it was a brutal punishment camp, housing 700 prisoners of all nationalities. To escape would take boundless ingenuity and nerves of steel.

But on the night of 23 July 1918, twenty-nine undaunted Allied prisoners (including several Australians) achieved the impossible. They had spent nine months using knives and spoons to move tonnes of earth, clay and stone, digging a tunnel over 150 feet long through the foundations of the barracks and under the walls and barbed-wire fences, to the farmland beyond.

This is the fascinating story of how they did it - and of the many who had failed before them. Neil Hanson provides a rare insight into the minds of these prisoners of war, revealing their resourcefulness, courage and persistence - and inexhaustible good humour. ﻿