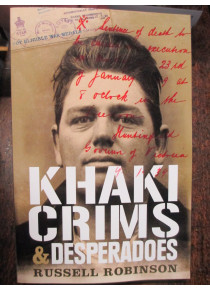 During World War I not every man who joined the AIF were good citizens.

Some of the volunteers that swamped the enlistment centers were no more than criminals.
Hardened men, fresh out of jail or even on the run from the law.
Back in those days, it was not easy for authorities to ascertain if a man was who he said he was. They donned the khaki uniform and blended into the AIF﻿, some become model soldiers and others remained criminal and desperados.

The records show that one in 14 Australian soldiers in the 1st AIF were court-martialed, 340 Australian servicemen face the death penalty in World War I. 38,000 serving Australians were imprisoned with hard labor for terms ranging from 6 months to 2 years. Almost 1000 were discharged in disgrace.

This book traces the bio history of some of the AIF's most interesting﻿ bad men. It also has enlightening stories of some criminals who actually were awarded gallantry decorations during the war﻿.