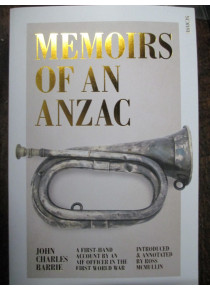 Memoirs of an Anzac 8th and 60th Battalion Officer during WW1.

Memoirs of an Anzac A First-Hand Account by an AIF Officer in the First World War By John Charles Barrie, Ross McMullin (Introduction by): new book

John Charles Barrie joined the Australian army in 1909. Five years later, when World War I was declared, John transferred to the 8th Battalion AIF as a 2nd Lieutenant. He landed at Gallipoli with the 8th Battalion on the 25 April 1915 and was wounded on the battlefield.

This book gives first-hand accounts of Barrie's wounding at Gallipoli on that fateful first Anzac Day, his recuperation in England, and the friendships he made there. It chronicles his escape from rehab so that he could return to his mates and the war in France, and his fighting for days on end, waist-deep in mud in the trenches.

On the 24th January 1917, he transferred from the 8th Battalion to the 60th Battalion AIF.
On the 12 May 1917 he was wounded on the 2nd occasion. His wounds were of a more serious nature than what he had received on Gallipoli.
He was deemed disabled and returned to Australia in December 1917.
After the war he wrote his memoirs, which were kept by his family
for 80 years.

Made public for the first time, Memoirs of an Anzac, tells of the horrors of war, but it is also lightened with the good humour that resulted from thousands of young Australian men being thrown together in dire circumstances. This is not a history textbook, nor is it a series of diary notes and letters — it is a gut-wrenching, heart-warming true story that that provides the life and tribulations of a frontline Australian soldier during World War I.
This book would obviously be of huge interest to anyone who had a relation who served in the 8th or 60th Battalions during the Great War.

Barrie remained a career soldier, who served during World War II.
He died in 1957, and was survived by his wife and daughter.