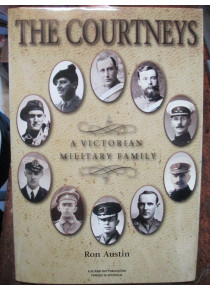 Many Australian visitors to Gallipoli pass by the war cemetery bearing the title Courtney's and Steele's Post, but few realise the significance of the name. In April/May 1915 the area was held by the 14th Battalion AIF, commanded by Lieutenant Colonel Richard Courtney, and known throughout the campaign as Courtney's Post.

This book is a biography of not only Richard Courtney but also of other family members who served in the military. The family lived in the vicinity of Castlemaine, Victoria.
Richard Courtney was the first Commander of the Victorian 14th Battalion AIF when it was raised in September 1914. His senior officers, were considered some of the best in the AIF, Captain Dare, Major Rankine, Major Adams and Major Young.

Courtney was on Gallipoli for a period of only six weeks (he suffered a severe heart complication after an attack of influenza)﻿, but was Mentioned in Despatches and gazetted a Companion of the Order of the Bath for "distinguished service in the field".﻿
He recovered enough to Command the Australian Base Depot at Weymouth before returning to Australia in 1917.﻿

Richard Courtney's brother﻿, Charles Courtney enlisted with the
4th Australian Light Horse Regiment on the﻿ 20 August 1914﻿. Although a medical practitioner he chose to be a Squadron﻿ Commander of the 4th Light Horse. He took his Squadron to Gallipoli where they fought for the defence of Steele's Post﻿.

Later during fighting at Chatham's Post Major Charles Courtney suffered  concussion from enemy shelling. He continued to have headaches, deafness and insomnia (Shell Shock) which made it impossible for him to carry on. Four days later he was evacuated to England.

He failed to fully recover and returned to Australia on 22 January 1916 and was discharged in ﻿March 1916 - he was found no longer fit for general service.

Later in 1917, he enlisted into the  Australian Army Medical Corps, commanding military hospitals in Australia.﻿

Another brother﻿, Thomas Courtney also served in WW I﻿. Thomas Courtney enlisted when he was 58 years of age, was appointed with the rank of﻿ Colonel into the Transport Section for several years although he traveled to England he saw no front line action.﻿﻿

There is also a biography of Charles Courtney's son Brian who saw WW2 service as an Airborne﻿ Medical Officer with the SAS. In 1944, he parachuted into Arnhem as part of Operation Market Garden, which commenced on 18 September 1944, and has since been labeled 'A Bridge Too Far'. He was taken prisoner by the Germans and survived the war.﻿