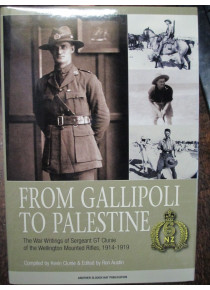 From Gallipoli to Palestine War Writings of Sergeant Clunie 1914-19

Provides the reader with a view of the historic Anzac operations at Gallipoli, then the successful campaign in Egypt and Palestine.

Garry Clunie sailed with the 6th Squadron Wellington Mounted Rifles Regiment in 1914 and did not return until wars end in 1919. He was wounded on 4 occasions.﻿ He served on Gallipoli at Walker's Ridge, one of the few to survive Chunuk Bair, and after the evacuation at ﻿Bir el Abd, Rafar, Beersheba and Abu Tellul.﻿

He maintained a diary in which he recorded daily events, which make for an unvarnished and fascinating story of the war. The authors could also draw on a numerous amount of uncensored letters which he wrote to his older brother. Garry Clunie also took numerous WW1 photographs which profusely illustrate this book.﻿