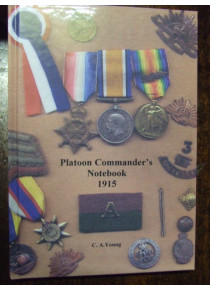 'Platoon Commander's Notebook 1915 ' by C A Young .
Young, the author, was given a copy of a Platoon Commander's Notebook which
listed the names and details of the original members of the 3rd Battalion 9
Platoon C Company AIF just before landing at ANZAC Gallipoli 1915 . This notebook
which was compiled by CPL Frank Barlow (Commander of the Platoon )lists 66 men
in the platoon. It had reference to the skills and talents of these men. Corporal
Barlow was extremely thorough in recording the details of the men of 9 Platoon
even to their rifle numbers. Young set out to investigate and find out as much
as she could about these men the results of which are the basis of this 317 page
book. Of the 55 men who landed at Gallipoli 24 lost their lives there. A further
17 casualties from Gallipoli returned to Australia and only 15 made it through
to the Armistice. The Platoon Commander's Notebook only deals historically with
the men enlisted in 9 Platoon for the period from August 1914 to the arrival
of the first reinforcements on the 7 May 1915. But the author follows the men
through their service and any details even after they returned from the war.
Details of marriage family life death dates are provided where known.
Thus forms an important Memorial to these fine young first day Landers.