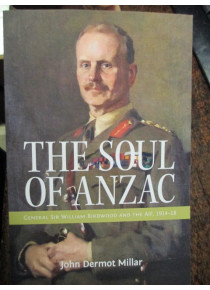 The Soul of Anzac by J D Millar﻿

This book is a military biography of Field Marshal William Birdwood during World War I. Birdwood was a career British Army Officer who had seen active service in the Boer War on the staff of Lord Kitchener.

After the start of WW1, in the later part of 1914, Kitchener ordered Birdwood to command the newly formed Australia and New Zealand Army Corps during the Gallipoli campaign. Later Sir Ian Hamilton GOC Gallipoli asked Birdwood to plan the landing of the Anzac’s at beaches North of Gabe Tepe. Subsequently, after the landing known as Anzac Cove.

During the Gallipoli campaign he formed a strong bond with the men and especially the commanders of the AIF and the New Zealand division. Thus the title of this book, ‘The Soul of Anzac’.

He commanded the Anzac Corps after it’s transfer to the Western Front. In October 1917 he was promoted to the rank of General and given the command the newly formed Australian Corps.
Not long after he was appointed Aide-de-Camp to the King. He was then given the high command of the British 5th Army in May 1918 in the Australian Corps command went to John Monash.

This book fills in much of the intricate detail of Birdwood’s illustrious career while commanding the Australian forces. There are chapters on the planning of Gallipoli, the Anzac landing, the August offensive and the evacuation of the peninsular. The Australian Battles of the Somme 1916 are covered likewise the 1st and 2nd Bullecourt Battles of April and May 1917. The last battle detailed is Passchendaele after which Birdwood was promoted.

His command at Anzac lived with him the rest of his life as he was made the Baronet of Anzac. Baron Birdwood of Anzac died in May 1951 is buried in a quite unpretentious grave at Twickenham Cemetery.