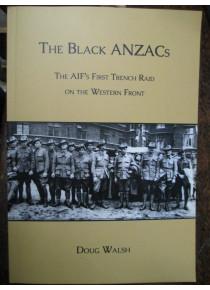 On 6 June 1916 a group of soldiers predominantly from the 26th Battalion and the 28th Battalion undertook the first ever offensive action of the Australians on the Western Front.
The action took the form of a raid into the German trenches at Armentieres.

The ‘Black Anzac’ title comes from the fact that the Raiders wore plain British uniforms, black sand shoes, and camouflaged their faces and hands with charcoal. The raid was led by Captain Cecil Foss of the
28th Battalion AIF.
A 25-year-old West Australian farmer who was awarded the Military Cross medal for his part in the raid. Unfortunately, like so many of the combatants that night, he would be killed in another battle 2 months later.

The raid was deemed a success, with the Australians reaching the German lines and retreating with several prisoners. Two Australians were killed by artillery on the return journey.

Due to meticulous planning, much as been recorded of the raid. The author, Doug Walsh is a son of one of the Raiders. Years prior, he come across a photo of the Raiders which is shown on the cover of the book. With some extensive research he has been able to name each of the Raiders and follow their journey throughout World War I.

This book would be of obvious interest to family history researchers of men who were members of the 26th Battalion and 28th Battalion especially those who were with these units around June 1916.