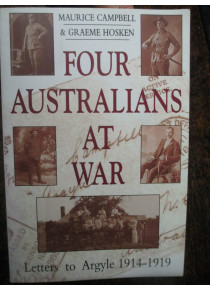 The connection between these four Australians was a farming property called Argyle owned by Angus and Helen Campbell located near Wellington New South Wales. This book would be highly recommended﻿ to anyone with interest in the battalions mentioned below. As the four boys were prolific letterwriters and the editors have added quite a lot of research to the story.

William Mair born Gulgong in 1874, was the youngest of four children. He had previously served with the 5th Imperial Bush and Contingent (Queensland) during the Boer War. He was a relation of the Campbells who lived on the farm.﻿

Within days of the commencement of World War I on 11 August 1914 he enlisted for service with the ANMEF the Australian force which was being sent north to capture German interests in New Guinea. After seven months, he returned to Sydney and immediately joined the AIF with the 2nd Battalion. But he then transferred to the 54th and was present with that Battalion at the Battle of Fromelles. Where he was severely wounded in the stomach.

Arthur Thynne was a farm hand at Argyle he served with the 20th Battalion and then the 2nd Pioneer Battalion. He attained the rank of second Lieutenant.

Harold Campbell son of the owner of the property, enlisted with the 3rd Battalion AIF. He was killed in action on Anzac Ridge in the Ypres salient on 7 October 1917.
His older brother, Corporal Wally Campbell, served with the 24th company Australian Service Corps AASC﻿