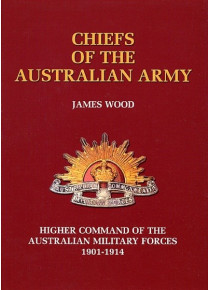 Chiefs of the Australian Army Higher Command of the AMF1901-14

'The Chiefs' tells the remarkable story of the dedicated Generals who led and shaped the Australian Army in its challenging formative years. The book gives the reader a fine understanding of the state of the Australian Army up to the outbreak of World War One in 1914. 'The Chiefs' were the men who organised the set up of the 20000 force of the AIF which was Australia's intial contribution to the Allied war effort.

Most important was Sir Edward Hutton, the larger than life Imperial officer, who, as the Army's first commander, battled with politicians to create a new army out of the disparate colonial forces. The first Chief of the General Staff, William Bridges, who later died commanding Australians at Gallipoli, is also well represented in the Book.
The Author, Dr Woods has undertaken wide ranging research, he brings to life the achievements of men like John Hoad, Australia's military attache with the Japanese Army in Manchuria, and creator of the Australian General Staff, and Harry Finn, a hero of Kabul and Omdurman, who became the Army's inaugural Inspector General.

'The Chiefs' explains how Adrian Wilson, exemplar British staff officer, oversaw the introduction of the Universal Training Scheme and the reorganisation of the Citizen forces. Another distinguished British officer, George Kirkpatrick, Inspector General at a time of rising international tension, worked relentlessly to prepare the Army for war.

Yet it was the obscure Joseph Maria Gordon, Chief of the General Staff, who reshaped the General Staff into a War Staff, and in 1912 negotiated contribution to a joint expeditionary force with New Zealand in the event of war.

These extraordinary men laid the foundation for the Australian Profession of Arms 'whereby the Australian soldier, who by his military virtues, and by his deeds in battle, has earned himself a place in history which none can challenge'. (Monash)