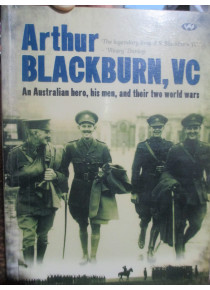 Arthur Blackburn VC An Australian Hero, his men, and their Wars By A Faulkner

This is the first biography of Arthur Blackburn VC, an Adelaide solicitor but also one of Australia's most remarkable soldiers.

A Gallipoli hero, it's documented that Blackburn made it further inland on the first day at Gallipoli than any soldier whose name is known. Blackburn continued to be seen on the frontline, at Pozieres he personally led succession of bloody grenade attacks in which more than half of his force were killed or wounded. For this action, the 23-year-old 2nd Lieutenant was awarded the Victoria Cross for valour.

A courageous man without doubt, he once again stepped forward to serve during World War II. Commanding a Machine Gun Battalion in Syria, he actually accepted the surrender of the French Vichy forces in Damascus.

After the surrender he and his men returned to Australia to defend against the Japanese advance. He commanded a brigade in Java before being taken POW witnessing the horrors of the Thai Burma Railway.

Gallipoli hero, Victoria Cross recipient, battalion and brigade commander, conqueror of Damascus and defiant antagonist of the Japanese - by any measure, Adelaide-born Arthur Seaforth Blackburn was one of Australia's most remarkable soldiers.

A large book of 498 pages which includes photographs taken by Blackburn never before published.