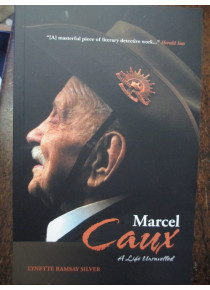 Marcel Caux was one of the nation's last surviving veterans of World War I prior to his death in August 2004. Veterans Affairs records of World War One veterans show that Caux's real name was Harold Katte, born 1899, who served in France and returned to Australia in 1919. The title leads to the mysterious life of Marcel Caux. Caux was three times wounded, he was awarded the French Legion of Honour in 1998 for his service in WW1.

Asked by one reporter why he had remained silent about his war service for eighty-four years, he said he did not want to bring back memories of killing other men. 'I was trained to kill ... and I killed. I can never get that out of my mind. It never leaves me.' Another journalist who posed the same question was told, 'Well, no one ever bothered to ask me about it'. When the questions were finally asked, however, no one could have guessed where the answers would lead.