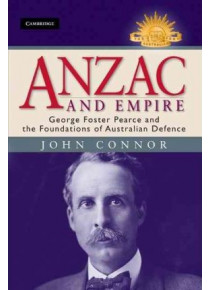 From The Australian Army History Series﻿

Anzac and Empire is the remarkable story of George Foster Pearce – a carpenter who became one Australia's most influential politicians, and the man central to how Australia planned for, and fought in, World War I.

The nation's longest-serving defence minister – holding the portfolio before, during and after the Great War – Pearce saw no contradiction in being both a fierce Australian nationalist, and also a loyal subject of the British Empire.Anzac and Empire is the first full-length biography of this extraordinary Australian.

Written by one of Australia's leading military historians, this book shows that to understand Australia in the Great War, you must understand the man behind it. ﻿