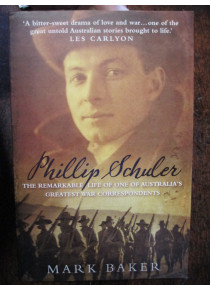 Phillip Schuler The Remarkable Life of One of Australia's Greatest War Correspondent﻿ by M Baker﻿.

Book includes 59 Photos pertaining to Schuler's life. Schuler was the author of one of the earliest accounts of Australia's Gallipoli Campaign, the book titled﻿ 'Australia at Arms' completed in﻿ 1916.

Schuler was obsessed to serve as a front line soldier. He abandoned the relative safety of a war correspondents work and joined the AIF as a humble soldier. Unfortunately, he succumbed to a fate of over﻿ 60,000 Australian soldiers during World War I. In June 1917 he was killed during the Battle of Messines being 27 years old.

This biography gives readers a new and compelling perspective on the power of journalism and Australia at war.﻿