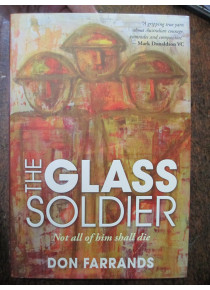 The Glass Soldier Not All of Him Shall Die by D. Farrands - new book

This is the true story of a young Australian soldier whose life of opportunity was cut down by trauma yet revived by strength and providence.

Nelson Harold Ferguson 9123, from Ballarat, was a stretcher-bearer with the 15th Field Ambulance, on the Western Front in France in World War I.

He survived the dangers of stretcher-bearing in some of Australia's most horrific battles: the Somme, Bullecourt, Ypres and Villers-Bretonneux. On the 17 April 1918, at Villers-Bretonneux, he was severely gassed. His eyes were traumatised, his lungs damaged.

Upon his return home, he met and married Madeline, the love of his life, started a family, and resumed his career as an Art Teacher. But eventually the effects of the mustard gas claimed his eyesight, ending his career.

Courageously enduring this consequence of war, he continued contributing to society by assisting his son and son-in-law in their stained-glass window business. Advances in medicine finally restored his sight in 1968, allowing him to yet again appreciate the beauty around him, before his death in 1976.

The story of this Anzac will stir your soul. It is a story of war and bravery, pain and strength, hope and miracles.