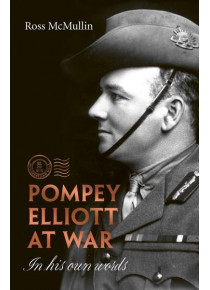 Pompey Elliott at War In His Own Words

Pompey Elliott at War In His Own Words by Ross McMullin

This book is about Australian soldier Pompey Elliott. The war book lists his writings diaries, letters and war correspondence in chronological order of the war.

Pompey Elliott was prominent in the iconic Australian battles  and numerous controversies of WW1. He was wounded at Gallipoli when landing with his 7th Battalion, and later four of his men were awarded the Victoria Cross for conspicuous bravery at Lone Pine.

He watched with great grief as his beloved 5th Division was sacrificed on the fields at Fromelles.

However, no one was more instrumental than Pompey in turning looming defeat into stunning victory at both Polygon Wood and Villers-Bretonneux. No Australian general was more revered by those he led or more famous outside his own command.﻿

He survived the war, returned to Australia to become a political identity as a Federal Parliment Senator. In later life he suffered from depression - war related. Until early morning of the 23 March 1931, when the great man  committed suicide by cutting himself with his shaving razor while an inpatient in a private hospital in Malvern.