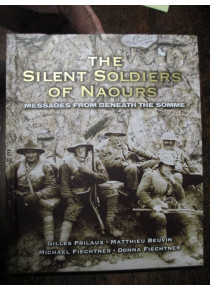 The Silent Soldiers of Naours Messages from Beneath the Somme

There is a mysterious element to this story, about the Australian soldiers who left graffiti on the walls of underground caves beneath the French village of Naours.﻿
Recently, rediscovered subterranean caves of Naours have revealed details of engravings, signatures and carvings on the walls of the caves.﻿

There are over 3000 signatures recorded on the walls throughout the network of man-made underground caves.

Naours is close to the town of Vignacourt where Australians spent much time on leave during service in WW1. ﻿

The authors have researched the graffiti﻿ and drawings and where possible have given life to the signatures by matching them to the names of Australian soldiers with their biographies.  A unique story which is somewhat similar, as you may remember, to the 'Lost Digger' photographs found at Vignacourt several years ago.﻿