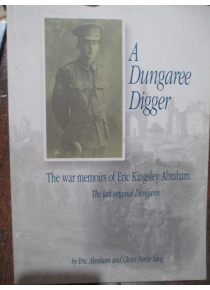 Eric Kingsley Abraham (20 April 1898 – 20 March 2003) was an Australian World War I veteran who is notable for having been the last surviving recruit of Australia's famous snowball march, the March of the Dungarees﻿. Dungarees marched from Warwick Qld to Brisbane in 1915.
In 1999, Abraham published his autobiography, this book - A Dungaree Digger.﻿
Abraham was involved in many battles including the Battle of Amiens, the Battle of Passchendaele and operations in Villers-Bretonneux and Morlancourt.﻿
Abraham died at the age of 104 on 20 March 2003 at an RSL nursing home in Pinjarra Hills, just one month short of his 105th birthday. Abraham's death resulted in Ted Smout being Queensland's last surviving World War I veteran.﻿