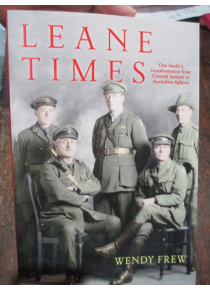 A famous WW1 Australian Family, The Leanes 48th Battalion Heroes. Their inspiring story is finally being told in this book.

Historian Charles Bean actually described the Leanes as 'the most famous family of soldiers in Australian history', and they were used as a poster family for recruitment in the First World War.

But these Aussie diggers were separated by only one generation from humble Cornish farmers, who sought godliness not glory when they sailed to Australia in 1852.

When Wendy Frew opened the genealogy cupboard to learn more about her marital﻿ ancestors, out fell a bunch of fiery evangelists and women's suffragists who embraced all the opportunities on offer in the new colony of South Australia.

Frew places her family at the crosscurrents of history - mass immigration, colonisation and war - and reveals a complex true story that will resonate with the descendants of Australia's early free settlers.

Leane Times is a vivid account of personal courage, triumph and tragedy.﻿

Praise for Leane Times
'Frew has drawn extensively on family research into their ancestors including war diaries kept by some of the soldiers, as well as deepening the research herself. Her accounts of the Gallipoli and French campaigns are riveting. This is a balanced account of an important family.' - David Kilner, History SA

Wendy Frew is an award-winning journalist who has interviewed captains of industry and media, pulled back the veil on corrupt developments in New South Wales, and taken a look at the seedier side of the art-auction market. She has worked in Australia and overseas for a number of media organisations, including Fairfax Media, Reuters and the BBC.﻿