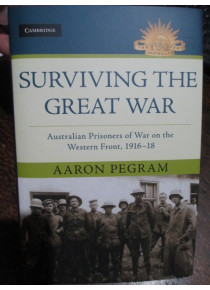 Study of the Australian Prisoners of War on the Western Front﻿
during WW1. Between 1916 and 1918, more than 3800 men of the AIF were taken prisoner by German forces fighting on the Western Front. Until now , their experiences and life, during their POW captivity, have remained overlooked.

The detailed narrative is supported with photographs and a map provides the location of the POW camps in Germany.

There is an appendix which has a soldier name list with details of the Australians who died in German captivity.