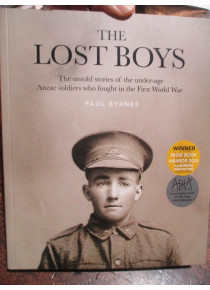 The Lost Boys By P. Byrnes

The untold stories of the Australian Boy soldiers of WW1.

In the Great War of 1914–1918, thousands of boys across Australia and New Zealand lied about their age, forged a parent’s signature and left to fight on the other side of the world. Though some were as young as thirteen, they soon found they could die as well as any man. Like Peter Pan’s lost boys, they have remained forever young. These are their stories.
There is also the story of a girl, Maud Butler who at 18 years joined up,
"when I was discovered and I admitted to the Doctor that I was a girl. My object in stowing away was to get to Egypt to join my brother, Maitland Butler of the 19th Battalion."﻿

This extraordinary book captures the incredible and previously untold stories of forty Anzac boys who fought in the First World War, from Gallipoli to the Armistice. Featuring haunting images of the boys taken at training camps and behind the lines, these tales are both heartbreaking and rousing, full of daring, ingenuity, recklessness, random horror and capricious luck.

A unique perspective on the First World War, The Lost Boys is military history made deeply personal, a powerful homage to youthful bravery and a poignant reminder of the sacrifice of war. ﻿