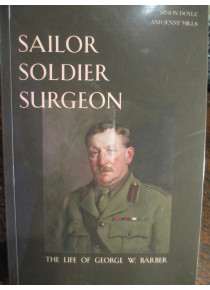 
This book is a valuable addition to Australian Military History defining the life and times of a Senior Medical Officer during WW1.

In October 1914,  Dr. George Barber was appointed Major in the Australian Imperial Force and sailed for Egypt on 14 December as registrar and second-in-command of the 2nd Australian Stationary Hospital.

After the landing at Gallipoli his hospital was based on the Gloucester Castle and the Franconia, dealing with casualties from the Peninsula. Barber became its commanding officer, being promoted as Lieutenant-Colonel on 1 January 1916 and temporary Colonel not long after.
A further promotion followed being made the Assistant Director of Medical Services for the 4th Australian Division.

He was mentioned in dispatches in July and served at Pozières and Mouquet Farm in August and September. While stationed on the Somme  he increased the effectiveness of field medical units. He done this by moving regimental aid-posts closer to the lines, increasing the number of stretcher-bearers and instituting new hygiene and sanitation regulations.

He was awarded the Distinguished Service Order in January 1917 and was confirmed as colonel next month.

Throughout 1917 Barber remained with the 4th Division, serving at Bullecourt, Messines and Passchendaele, and was mentioned in dispatches three times.

On 8 April 1918 he was made deputy director of medical services for the Australian Corps. His skill as an organizer and administrator was most fully appreciated in mid-1918 when trench warfare gave way to mobile warfare; adapting quickly, he reorganized his field medical units so successfully that the evacuation of the wounded and the provision of medical supplies continued smoothly.

On the 22 April 1918, Barber was sent from Australian Command at Chateau de Bertangles to 3 Squadron Australian Flying Corps Poulanville to examine the body of Baron Von Richthofen who had been killed the previous day. His findings are recorded in this book and were used by Charles Bean to promulgate the theory that Sgt Popkin had fired the lethal shot from the ground.﻿

His arrangements for the battles of the Hindenburg Line, Polygon Wood and Messines are regarded as models of careful organization and efficiency. In 1918 he was twice mentioned in dispatches, and on 1 January 1919 was awarded the Croix de Guerre; he was appointed C.B. .

The book also includes an unpublished poem by Banjo Paterson 'Thewail of the horse poet' which he personally wrote in the diary ofJess Salmond (who was soon after to marry George Barber).﻿