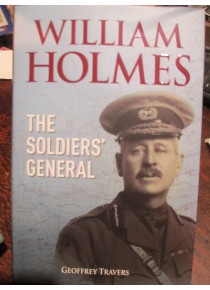 William Holmes was one of the foremost Australian citizen soldiers of his time. A Boer War veteran,  Holmes commanded Australia’s first independent military expeditionary force in World War I - the ANMEF.

He and the ANMEF were tasked in 1914, to capture German interests in New Guinea. After a short Campaign he accepted the first German surrender of WW1 for Australia. He was then a commander of the 1st AIF being present at Gallipoli, Pozières, Bullecourt and Messines, where by he earned a reputation for fearlessness in battle, believing that at critical times and even during pauses in engagement, reconnaissance should be conducted by the officers in command making the decisions.﻿

This belief proved to be very dangerous when on the 2 July 1917 near Messines he suffered a fatal artillery shrapnel wound. He was showing the Premier of NSW the vista of the Messines  Battlefield when a range finding shell exploded close by - he suffered the only injury of the group.