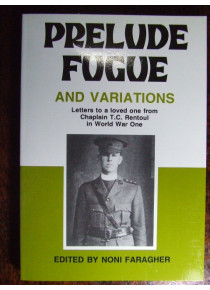 This military WW1 book lists the diary and letters of an Australian Chaplain in World War One.

Prelude Fugue  edited by his daughter N Faragher .
Letters back home of Chaplain Captain T C Rentoul . The Author Rentoul served as a Chaplain with the AIF during the WW1. He survived the First World War and returned to Australia on 1919.
He also served in the Islands during Second World War but contacted a rare Tropical disease later died in 1945.
So what was it like being a Chaplain on the Western Front paragraph from one letter," Of the Gruesome side I will say nothing in ....It is too dreadful. But it is always here and papers do not mention it. Suffice to say that I collected two sand bags full of id discs and paybooks: also a few letters, diaries and pocket books. These were from unburied dead, both Australian and British , who have been lying on the battlefield for about three months.This was the most dreadful few acres I have ever seen on God's earth. I dried the letters and books in the sun now I have a huge amount of work to write to their relatives."