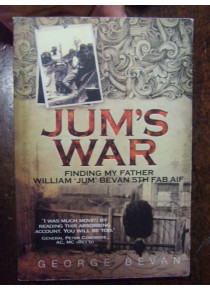 When George Bevan discovered his father's wartime diaries and medals. He realised he never really knew much about his Father's war experiences and decided to find out what he could. George used Jum’s war diary to recreate his father’s wartime experiences as an artilleryman and mounted runner, interweaving the diary excerpts with his own memories and research.

Jum's War features a foreword by General Peter Cosgrove. This book would be of immense interest to people researching the genealogy of a member of the 5th Field Artillery Brigade AIF World War One or indeed any AIF artillery unit member .

The 5th Field Artillery Brigade 14th Battery was part of the 2nd Division AIF. During 1918, the 5th FAB used 18 x 18 pounders, 6 x 4.5 inch howitzers. Jum was present on the battlefield from April 1916 returning to Australia in June 1919. He worked on the British 18 pounder artillery - one of the most common guns on the WW1 battlefields. The book has a very interesting aftermath chapter listing some sad cases of suicide of the very soldiers that survived 4 years of the most terrible war.