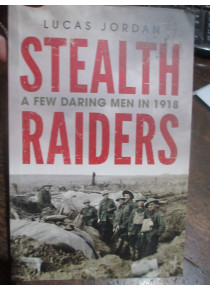 $35.00
Stealth Raiders By L Jordan
Accounts of the Australian stealth raiders during 1918. A stealth raid was organised on the spot by soldiers who recognised an opportunity. May have been under the disguise created by a field of wheat or a night time raid into the enemy trenches.  The raiders were brave diggers as most times it initiated a man to man fight, kill or be killed. The detailed narrative is supported by photos and period illustrations. The book concludes with a bio list of soldiers.