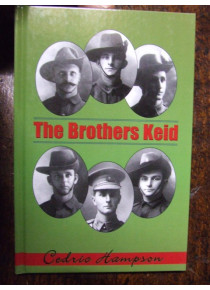 The Brothers Keid " by C Hampson

The Brothers Keid " by C Hampson . This is the printed record of the remarkable life story of six Australian brothers who all volunteered for service in the Great War. By May 1915, all six brothers had joined and were either fighting or on their way to the front. Being Brisbane Boys, Harry, Ted, Leonard and Walter joined with the famous Queensland 9th Battalion. Both Harry and Ted being present at the landing on 25th April 1915. Bill Keid rode with the 2nd Light Horse while Guy Keid found his way into to the 3rd Field Ambulance when it was first formed at Enoggera Brisbane in early September 1914. They were a Family of Patriots, even their Father trying to join up at age 59 ! Such was the Spirit of Australians for Duty to King And Country... The brothers Keid were second generation Australians. Harry, the eldest, was 31 when he enlisted and Guy, the youngest, 19. Four were at Gallipoli and five served on the Western Front. The sacriface was great as four Brothers would not return from the war.. Bill being killed at Gallipoli on the 23rd June 1915. Leonard and Walter while serving with the 49th Battalion were killed in action at Pozieres on the 3rd September 1916 (Charge at Mouguet Farm). Guy who was present in the same Battle searched the Battle field for their bodies.
He was profoundly effected by the the death of his two brothers on the same day and the Army returned him to Australia sighting "Family Reasons".
Ted was killed during the Battle of Passchendaele on the 2nd November 1917.
A Tragic Story Lest We Forget