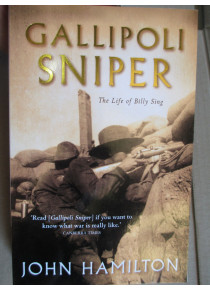 This book on war is the history of Anzac Gallipoli Digger Billy Sing.

Due to his shooting ability he become an excellent sniper for the Regiment. He was reputed to have shot over 200 Turkish soldiers. He became somewhat of a celebrity on Gallipoli for his sniper feats.
He was known as the "The Assassin of Gallipoli". The famous Australian Author Ion Idriess was a Trooper in the 5th and mate of Sing. He spotted for Sing many times. Idriess noted in his Diary about Sing numerous times and later in his book, Desert Column , saying Sing was, "... a picturesque looking mankiller"

On one occasion Sing was visited by General Birdwood who then acted as Sing's observer.General Hamilton mentioned his exploits in his dispatches.
The support of the Australian High Command placed no official obstruction in Sing's way. Sing's accuracy received almost exalted sanctioning. Later in 1916, he was awarded the Distinguished Conduct Medal for conspicuous gallantry from May to September 1915 at ANZAC as a sniper.

This book is full of interesting stories relating to Trooper Sing and his life in the
5th Lighthorse and the 31st Battalion on the Western Front. The most famous being the duel between the Turkish sniper, "Abdul the Terrible" and Sing at Chatham's Post Gallipoli during June of 1915. In 1915, Australia's press wanted its own heroes. Billy Sing slid comfortably into the national role his rifle had created for him. Even international press knew of the Queensland marksman. Reports of his Gallipoli successes appeared in London and American newspapers.

After Gallipoli, Sing left the 5th Lighthorse for the 31st Battalion which were travelling to the France and the Western Front.
Once again, his worth as a soldier was recognized by the Allied High Command. In October 1917, the Army Corps Commander expressed his appreciation for Sing's,". . . gallant service during recent operations". This may have taken place at Polygon Wood in late September 1917, when Billy led a fighting patrol which succeeded in eliminating German snipers who were causing casualties among the Australians. Sing was recommended for the Military Medal - for his work in identifying and
dealing with German marksmen. But this was never approved.

However, early in 1918, he was awarded the Belgian Croix de Guerre, which may have been the result of the Polygon Wood action. He was not able to overcome old wounds and illness. In July, Sing was posted to a submarine guard on an Australian-bound troopship. It had been almost four years since he had left Clermont for his grand adventure. Billy's Gallipoli reputation faded from memory with the increasing number of Anzacs who passed away each year. . .

Lest We Forget his Service to Australia....