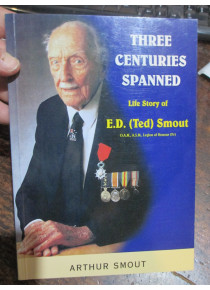 Edward (Ted) Smout OAM was born in Brisbane on the 5th January 1898.

He enlisted for AIF WW1 service in September 1915. Ted Smout said that he 'couldn't wait to enlist and join the diggers fighting a war'. To join, he lied about his true age of only 17 years. The specialist unit that he joined was part of the Australian Army Medical Corps (AAMC). As a member of the No 3 Sanitary Section 3rd Division AIF, he was responsible for checking drinking water on the frontline.

During his long life, he spoke and documented descriptions of his service. He said he had witnessed 'terrible casualties, shocking casualties. Some of them were so horrendous that today if you saw them you'd faint, you know, with shock.'

Historically, his eyewitness account of the crash and death of the Red Baron was deemed as his most important recollection.  On the 21st April 1918 at Morlancourt Ridge, near the Somme River, Smout was an eyewitness to the final moments of the famous German flying Ace Manfred von Richthofen (aka the "Red Baron"), being one of the first to arrive at the crash site.

During his later life he was vocal against Australia becoming involved in far off wars such as the Iraq War.

Sgt Edward (Ted) Smout OAM died on the 22nd June 2004, he was 106 years old and was Queensland’s last surviving WW1 veteran.
Smout had been awarded France’s highest honour, a Chevalier of the Legion d’Honneur in 1998 and an OAM for service to the community.

His Brother Arthur, compiled the book from Ted Smout's verbal recollections while he was still alive. The book is written as
Ted's autobiography and records details of his whole life.

This is His Story