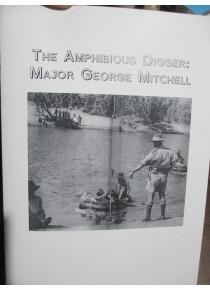 George Deane Mitchell (1894-1961), soldier, author, politician and lifelong larrikin, was born on 30 August 1894 at Caltowie, South Australia. George was a clerk in Adelaide when he enlisted in the 10th Battalion, Australian Imperial Force, on 5 September 1914. He served at Gallipoli from 25 April 1915 until he was evacuated with enteric fever on 6 August. Rejoining his battalion on 9 September 1916 in Belgium, he was transferred to the 48th Battalion on 31 October and promoted lance corporal on 17 March 1917.On 11 April, after six hours of bitter trench fighting in the first battle of Bullecourt, France, Mitch covered his comrades' retreat, then shouldered his Lewis gun and strolled through heavy enemy fire to his lines. He was awarded the Distinguished Conduct Medal and was promoted second lieutenant. His walk entered A.I.F. legend.

He wrote of his WW1 experiences in his book BACKS TO THE WALL. He enlisted for WW2 service and become the commander of the Guerilla Warfare Group which was a secret unit raised to fight any Japanese invasion of Australia's coast around the Kimberley's Western Australia - a history of this unit is available Fighting the Kimberley.

This unit was disbanded and Mitchell became the OC 43rd Landing Craft Company. The title of this booklet refers to Mitchell's amphibious landing of 600 soldiers at Dove Bay New Guinea in May 1945 and the fact that he was the only person present that had also taken part in the amphibious Gallipoli landing .