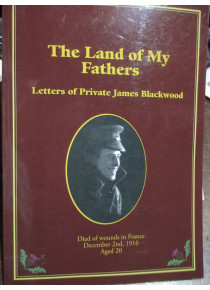 Letters of a 2nd and 30th Battalion Australian Died WW1

$42.00
The Land of My Fathers Letters of Private James Blackwood by D C Rothnie

Blackwood joined the AIF while only 19 years of age directly leaving law University to do so. He was allotted to 12 Reo 2nd Battalion arriving on the 4 June 1916 to Western Front. He survived only about a month as he was wounded on the 24th July 1916. The wound was a 'Blighty' but he did prevail only to return to the Front on the 14 October 1916. This time being taken on strength with the 30th Battalion. On the 24 November he was shot in the leg. Taken to the field hospital/CCS where he succumbed to his wounds on the 2nd December 1916.

But a young life, he is remembered, this is being his story.